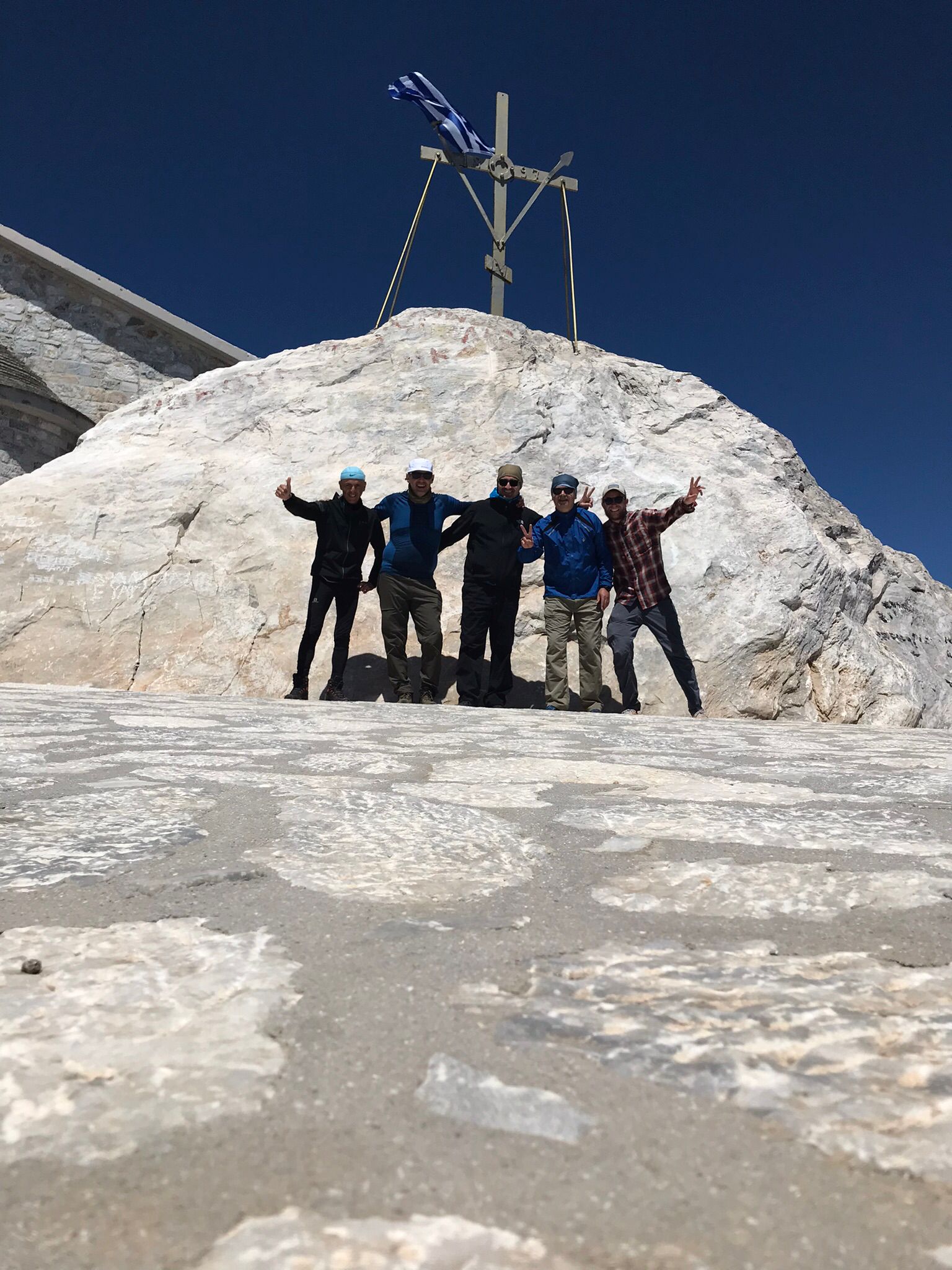 the four mountaineers (by guido)

The last moments with a close friend who came to visit Ziggy and me in Thessaloniki arrived. We were sitting on the stairs in front of Hagois Demetrios, drinking beer and watching the darkness of the night fall into the city streets. The next morning the close friend would leave and Ziggy and I had to hit the road again, heading east. Since we hadn’t put much thought into what next, I took a coin out of my pocket: heads for going straight to Alexanderpouli, tails for the holy mountain Athos and its monasteries. I flipped, saw the coin tumble in the orange light of the street lights and knew what I wanted: Athos. So the next morning, after saying goodbye to my close friend, I went to the Holy Executive House of the Holy Athos on Egnatia, seeing if there was some room for a cycling atheist in one of the twenty holy orthodox monasteries.

At the office, they gave me a list of the monasteries with their corresponding phone numbers. Kind of randomly, I selected three and started calling. The first two didn’t answer, the third one did: Saint Anna Small Holy Skete. ‘Hello?’, I heard on the other side. ‘Hello, my name is Guido and I am traveling by bike to the east. I was wondering if I could visit your monastery in the coming days.’ Silence. ‘Where are you from?’ ‘I am from the Netherlands.’ Another short silence. ‘You can stay one night.’

The office members told me there was a place on the ferry the day after tomorrow. A short gaze upon the map said it was possible to cover the distance from Thessaloniki to Ouranoupoli, the place where the ferry would depart, in two days. They booked me a place and off we went.

I guess it took Zeus time to figure out why and where we were making a detour: just before Lemonis big clouds started to form high above us. After setting up camp in the orchard of fisherman Giannis, the storm hit Ouranoupoli in full force, testing both the tent and my will to visit that other holy Greek mountain to its limits. The god of Gods must have been jealous.

Not less determined, the next morning, after a quick COVID-test, buying a ferry ticket, receiving my holy visa with some heavy frowns when I said my religious background was pretty much blanco and a breakfast consisting of bougatsa (food I grew fond of during my days in Greece), I and around fifty pilgrims boarded. They were only men since no women are allowed on the island due to religious reasons, which, by the way, applies also for most of the animals that live within the monastery walls, exceptions being made for some animals such as cats to keep the mouse population to a bearable level and hens for the eggs. When the cargo was on board, the ferry started cruising through the calm, deep blue sea.

While the opportunistic seagulls that followed us were fed by some of the passengers, I began realizing this trip was not the normal tourist destination. Unfamiliar countenances, strange tongues, an odd diversity of children and very old men, some in black robes with long beards and long, dark hair, some carrying what looked like heavy duffle bags, some traveling with big suitcases, some with serious mountaineering gear. I felt completely out of place. First as a Western European, second only carrying a backpack filled with one pair of socks, knickers, a small bottle of water, a towel, a book and my notes of the trip.

It took us an hour or so before the first monasteries on Athos started to appear, most of them built between the pebble beaches and the rugged, thickly covered slopes. They looked rather well maintained and most of them had splendid colors: purple, blue, pink, green. Heavy construction work was going on. In small groups, passengers were dropped off onto the tiny harbors of each monastery. After two more hours of cruising and a short stop halfway, a group of Moldavian pelgrims, a skinny guy that carried an enormous backpack almost his own size, a German speaking Greek, two other men and myself went below deck to leave the ship: we had arrived at Saint Anna Small Holy Skete.

Setting foot upon the sacred land, there was no welcome party: neither one of the present monks nor the only non-religious person working in the harbor could tell us what to do or where to go. The Moldavians took the initiative, the rest followed. One by one we started walking up the steep steps, hoping they would lead us somehow to the holy skete. I quietly followed the skinny man. God knows how many flights of stairs later, the main buildings of the monastery became visible through the green canopy of the lush surroundings. We were on the right path.

Entering the complex of the Saint Anna Small Holy Skete made me feel like walking through an Elvish town from Lord of the Rings. Narrow alleys, stairs leading to vegetable gardens, chapels and houses, beautifully plastered walls, pathways carefully built around olive trees, colorful flowers in pots, places in the shade for intimate conversation, pagodes, hanging bushes, it was all there and everything was extremely neat and clean. I mean, I could not find one tiny thing that was out of order. It was simply astonishing: how much effort, thought and care must have gone into designing, constructing and maintaining this place.

On an outlook more than 300 meters above the glittering sea and in front of the main church, one of the fathers with a friendly face, long arms and slender hands welcomed us with tsipouro and Turkish Delight. Witnessing this place, I had changed from an atheist into an agnostic, writing down my new religion in the pilgrim book.

I decided to stay for supper and head for the summit if possible the next morning after breakfast. This gave me an opportunity to figure out if and how I could get to the mountain top from Anna and, at the same time, maybe observe a little of what the monastery life was all about. So after supper I followed the other pilgrims into the main church for mass. Three heavily packed mountaineers had joined the skinny guy in the meantime and since one of them had talked to me during the meal, I stayed close to them.

One must know, I have had no religious education whatsoever. Many years back, in the church of my hometown – of which I saw the interior only when somebody close had died or was remembered, I noticed once how an ignorant child didn’t eat the body of Christ instantly, receiving a reprimand from the priest. Unconsciously, I guess, it had left a mark on me, making me somewhat uncomfortable during masses or other religious gatherings. Following the four men took away some of the uneasiness which descended upon me when I entered the dark church, dimly lit by candles on chandeliers that hung from the high ceiling. Psalms were sung, the smell of incense was heavy. A line was formed, one by one the men started kissing a picture of what must have been a holy saint. Am I going to do this? No, I will pretend though. It was a half-hearted try, a really bad attempt. The priest and present fathers said nothing but they must have noticed my weird behavior: from that point on, they looked different towards me.

Shortly after mass, around six in the evening, the gates of the complex were closed. We were confined to our simple but decent dormitories and a small square around the main church. With the sun setting over this magical place and next to no room to move freely, it felt like being trapped in a golden cage. On the slopes, paths and stairs around us, monks wandered. Not always seeing them, you could hear their shuffling feet though. Eco’s description of the daily business in the Melk monastery (The Name of the Rose) suddenly made a lot of sense.

Although the four mountaineers got permission from the priest to see more of the monastery in those late hours, eventually they joined us. I talked a little to them. Apparently, Saint Anna Small Holy Skete was one of the two monasteries which had a direct trail to the top, meaning I was pretty lucky that two days ago this exact monastery had picked up the phone. Furthermore, I found out that the four men knew the path to the summit and they would leave the following morning around sunrise.

‘What will you do?’ I told them that I would wait for breakfast and then head for Athos. ‘Mmm, didn’t you bring any food yourself?’ I said I had a pack of nuts, a little bit of honey and a small bottle of water. ‘Are you planning to climb Athos with that?’ I noticed an undertone of surprise. ‘Yeah, after breakfast, that should be enough I was thinking.’ They looked at each other. ‘You can join us tomorrow morning.’ One of them – he looked like he was the eldest – handed over a pack of dried figs. ‘Good stuff.’

I knew it was good stuff: earlier, somewhere in Albania, two experienced travelers who decided to not travel but live on the open road told me a handful of nuts (not treated) with some dried fruit will keep you going for an entire day, hiking or cycling. ‘How much water will you bring? Do you have a bag?’ A good humored middle aged guy with heavy glasses and dark short hair, the one that told me I could join them, wanted to know more. ‘This small bottle and yeah, I have a bag.’ He asked: ‘a plastic bag or…?’ At first I thought he was joking, but then I thought: wait a second, my preparation for this trip is somewhat different compared to theirs – I guess he’s asking a sincere question. ‘I have a backpack.’. He smiled. ‘Good, ask for another water bottle from one of the pilgrims and join us tomorrow. We will take care of you.’

The next morning, I woke up at around five in the morning, got my stuff together and silently followed them. Soft morning light welcomed us. The gates were open. The four mountaineers – Dimitskos (the one who offered me the dried figs), Pascalis (the skinny guy with the voice of a nightingale), Giorgos (the good-humored man with the questions) and Sifis (the wise man with all the answers on how to behave in Greek orthodox monastery) together with their cycling tag-along were set free and the ascent of Athos had begun.

Dimitskos led, determined our pace. The rest followed. There were moments of silence, moments of laughter and moments where Pascalis, the troubadour with the golden voice, sang Greek tearjerkers. Only with a few short breaks and a change-of-clothes-break at the refuge run by father Ambrosius (living practically the year round on the mountain slope) – where we offered tsipouro, delicious plums covered in chocolate, hazelnuts and more, we made it to the summit and rang the bells of Athos.

I grew fond of the four mountaineers, especially during the descent when I was able to talk with them about various aspects of (Greek) life. Here’s what I learned from my stay in the monastery and from them: