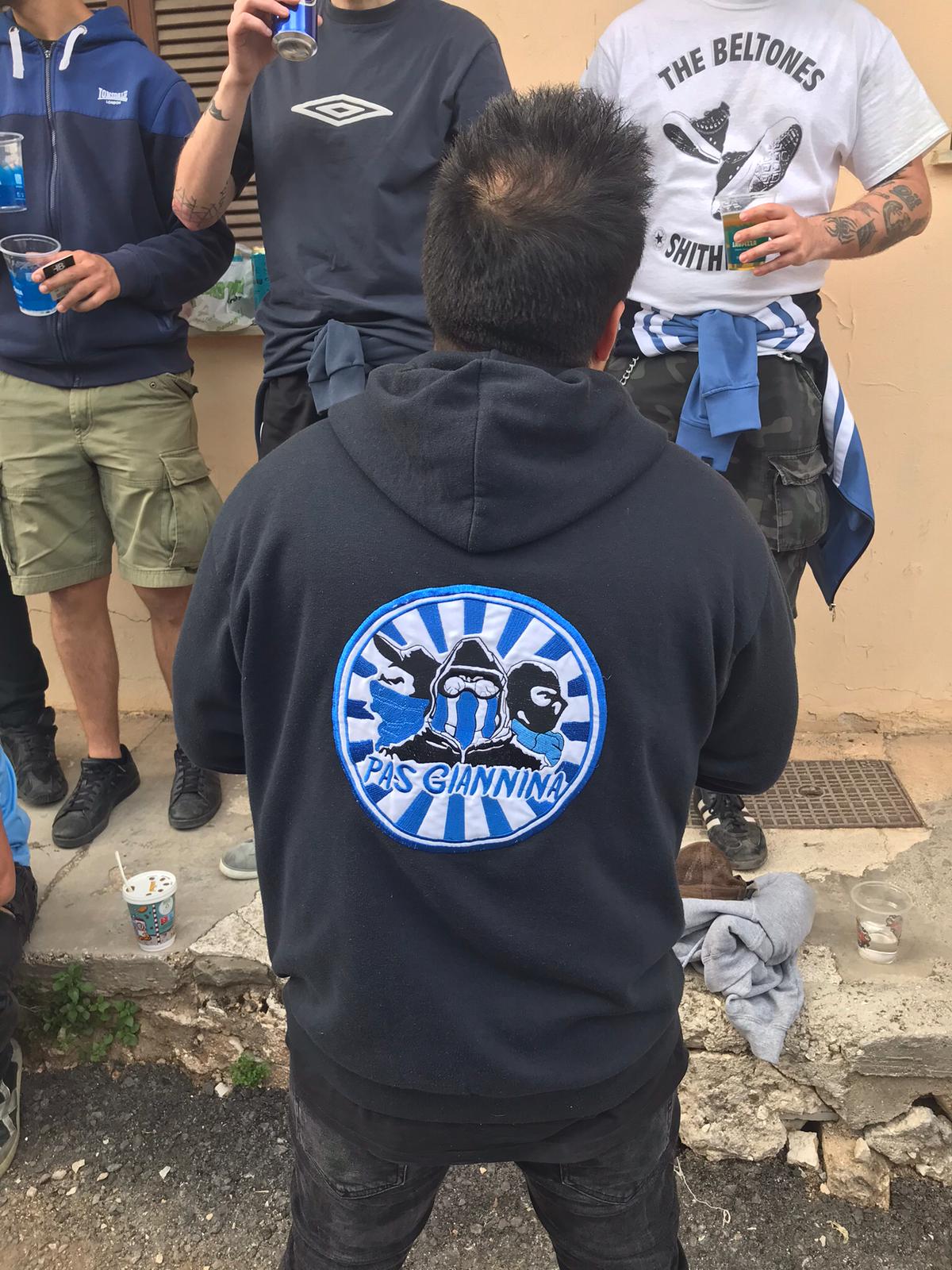 It all started with two men playing tavli on a terrace next to a busy traffic crossing in Ioannina, a university city in Greece. We had arrived the other day after some splendid camping days in the countryside of Albania and were exploring the city. Following the advice of the owner of the hostel, we went to a place that buzzed with excitement: dogs, cats, birds, waiters, old people discussing with their hands, young people talking, smoking, drinking freddo and frappe (traditional Greek coffee) and some playing a game on a playing board Guido recognized. It was a backgammon playing board and he carried a travel version with him, a gift from his mother.

He told me at the beginning of the journey he only knew the very basics of backgammon and wanted to learn to play it properly. Why, you may ask. Well, backgammon being one of the more universal games in the world, he thought, through playing with people could avoid the language barrier. In other words, he would still have a way of communicating with them without speaking or talking to another. Exactly the same as is with listening to music together or engaging in sporting activities. But, in order to make this intention work, he had to practice and learn the game. Here, on this terrace in the shade of some big chestnut trees where we could see at least six duo’s playing on a backgammon playing board, an opportunity presented itself.

So we stopped in our tracks and started watching what all the players were doing. After some time, Guido asked two guys if he could sit beside them and watch them more closely. He could. They were playing fast and the rules most of the time seemed to differ from the ‘traditional’ backgammon rules. So Guido asked what they were doing. They explained they were playing tavli, a Greek version of the game consisting of three ‘subgames’ called portes, plakoto and fevga. It was hard to follow but after some time, he had learned a little about what to do and how to play it. However, there was something else that he was more excited about: the two guys were fans of the local football club PAS Giannina and they invited him to the game against PAOK the next day. Unconsciously he had really missed football so far on this journey so I understood why he was keen on going. However, he didn’t know if the guys were serious or just joking around.

In the evening Guido went out again, to eat and to find a local bar where he could sit, observe and be immersed by all the hectic, promises and theater on a Saturday in a vibrant city. He found one, enjoyed some beers, fell at least three times in love with a passing lady and later that night met Eva, Lydia and Harris. This wonderful trio invited him to join them and they talked, talked and talked. About Greece of course, traveling, the delicious food, music (Harris used to be a bass guitarist in a punk rock band touring through all of Europe), living in France (Eva, the sister of Lydia, had moved for love to the country of good wine and food and was now visiting her relatives) and art (Lydia is a very talented painter). I heard him stumble into the hostel somewhere around five in the morning.

Despite his late night escapades, he rose before ten and took me out for a second tour through Ioannina. Together we watched people crawl to the finish line of the half marathon of Ioannina, cycled over the boulevard and through narrow streets, went to a bakery that sold some old bread from the day before, sat at the same terrace and watched some more tavli. Although it was a perfect Sunday in many ways, I felt there was something off. After the invitation for the football match, he also got invited by Eva, Lydia and Harris to have lunch that afternoon in the hills outside Ioannina. But it was already one pm and he didn’t know at which place they would lunch or how long it was cycling. Furthermore, the match started at six and he had not heard from the Orestis or Dimitris, the two tavli players. Not knowing what to do he said: ‘Fortune favours the bold. Let’s go back to the hostel, change clothes, start riding to the south side where the hills are and see what happens.’

We did as he said, flew alongside the lake of Ioannina and started climbing the hills. After half an hour, we got a message. The place was understaffed and full. They could not host us. Us being Eva, Lydia, Harris, his dog, Guido and me. Eva found another place so Guido and I had to turn around. After some turning here and pedaling there we made it. He parked me, joined the three for a traditional Greek lunch and they talked, talked and talked again. About the beautiful dog Harris brought with him and which he adopted. About souvlaki, homemade wine, homegrown food. About work, the differences and similarities between Greece and other countries.

After an hour or so I noticed that Guido was getting uncomfortable. He got a message from Orestis and Dimitris. He could join them to the match but it was already half past four and it was at least 40 minutes cycling. Besides that, on the way back he had to find some good tsipouro from outside the city as well because he made a promise he would bring some before the game. How to solve this time puzzle? There was still food on the table and he didn’t want to be impolite towards Eva, Lydia and Harris. Just tell them the truth and say you would love to see the game.

Of course the three understood and around five we were flying back to Ioannina, carrying no tsipouro because the restaurant didn’t sell anything. Hurrying over gravel roads through the backcountry, avoiding barking dogs and the city traffic, dropping me of at the hostel, changing clothes, finding a bar that sold tsipouro, running through the streets with a plastic cup filled to brim with the strong smelling drink in one hand and phone with directions towards the Zosimades stadium in the other, he arrived ten minutes before the game at the entrance of the stand where the ultras of PAS Giannina were anxiously waiting. A lot of fans, for sure, but no sight of Orestis and Dimitris.

Some fans noticed the unknown face and came up to him. ‘Where are you from? Let me smell that drink.’ He told them he was from the Netherlands. Their eyes lit up. ‘Amsterdam? Amsterdam? This is good tsipouro. Not bad at all.’ Guido answered that he was living before his journey in a small village, 30 kilometers below Amsterdam. ‘You like Ajax?’ He told them he used to be a fan and normally saw two games a season but his fanaticism for the club had dwindled through the years. ‘We are the Ajax of Epirus. We love Ajax. The veterans play against each other this summer. There is a strong relationship between the clubs…’ Guido, he told me afterwards, found it a little ironic that a Greek football club was named after a Dutch football club that was named after a Greek hero.

But no further distractions. Orestis and Dimitris came walking up to the entrance. ‘Good, you’ve made it on time. Okay, let’s go in. Follow me’, said Dimitris. Guido followed, got a warm embrace from the steward who knew what was going on and there he stood, in a half filled traditional stadium, humming with the ultras, joining the emotional melting pot that is a Greek football match. Within minutes a guy that had filled his cup outside the stadium came by for a handshake and another visit with the two liter bottle of tsipouro. You are not allowed to bring a can of beer into the stadium but two liter spirits was apparently no problem. James to that policy.

‘Hieedo, you should not drink with that guy. He is a good guy but also a crazy guy. You will die.’ Little did they know that ‘Hieedo’ lately can eat and drink as much as anyone. It must be because of all the cycling, I think, that he can handle so much alcohol and food. Same story in Banja Luka where he drank for seven hours straight without getting drunk. In the Netherlands, that never would have happened: he would be throwing up, sleeping or stumbling home after just four beers. (He told me he’s not proud of it and it worries him a little.)

Half time. 0-0. The stadium speaker announced that the city women’s volleyball team had forced promotion that same evening. They walked into the stadium, waved in front of the grand stand and then walked towards the stand with the through-thick-and-thin fans. In their bright blue jumping suits and with the heat of the championship game still visible on their faces, they started to dance and sing. Some of the ultras put their shirts back on in order to look a little more civilized. After 15 minutes of celebrating, half of the women’s team left, leaving behind five women who saw the start of the second half. One of the women asked what Guido was doing there. He told her about his journey but couldn’t finish: the chairman of the supportersclub was waving towards Guido and shouting. ‘Come, come, come! You must sing an Ajax song for us.’

You must know, Guido has never done such a thing. He knows next to nothing about Ajax chants. The only two he knows are obviously in Dutch: ‘Want Amsterdam, is poep op de stoep…’ and ‘Wij zijn Ajax, wij zijn de beste.’ Not really chants Greeks supporters are able to repeat instantly. So he was not at ease when he descended and the chairman stopped the drummer boy and made the stand go silent. ‘It is easy. Just say Owee three times and clap your hands every time you say it.’

‘Ziggy, I will never forget that moment. It will be a core memory for the rest of my life. Some 50 bare chested ultras in front of you, fire in their eyes, heavily breathing, just waiting for you to say or do something.’ He took his cap and sunglasses off, climbed on the railing and did as the chairman of the supportersclub had told him. It was probably the worst chant that ever left the stands but it didn’t matter: everyone went completely nuts. Jumping bodies everywhere, waving flags, beer and tsipouro in the air.

After returning from underneath the pile of fans, back to the place where Orestis and Dimitris were, the volleyball women shook her head and said: ‘You are crazy!’ The only words he could utter in return were: ‘What just happened?’

Eventuality PAS Giannina won with 1-0. Guido thanked all the beautiful people he met in the stands, went back to the hostel to cool down and met one more time with Eva, Lydia, Harris and Joris, the last one being someone you will be hearing more of.