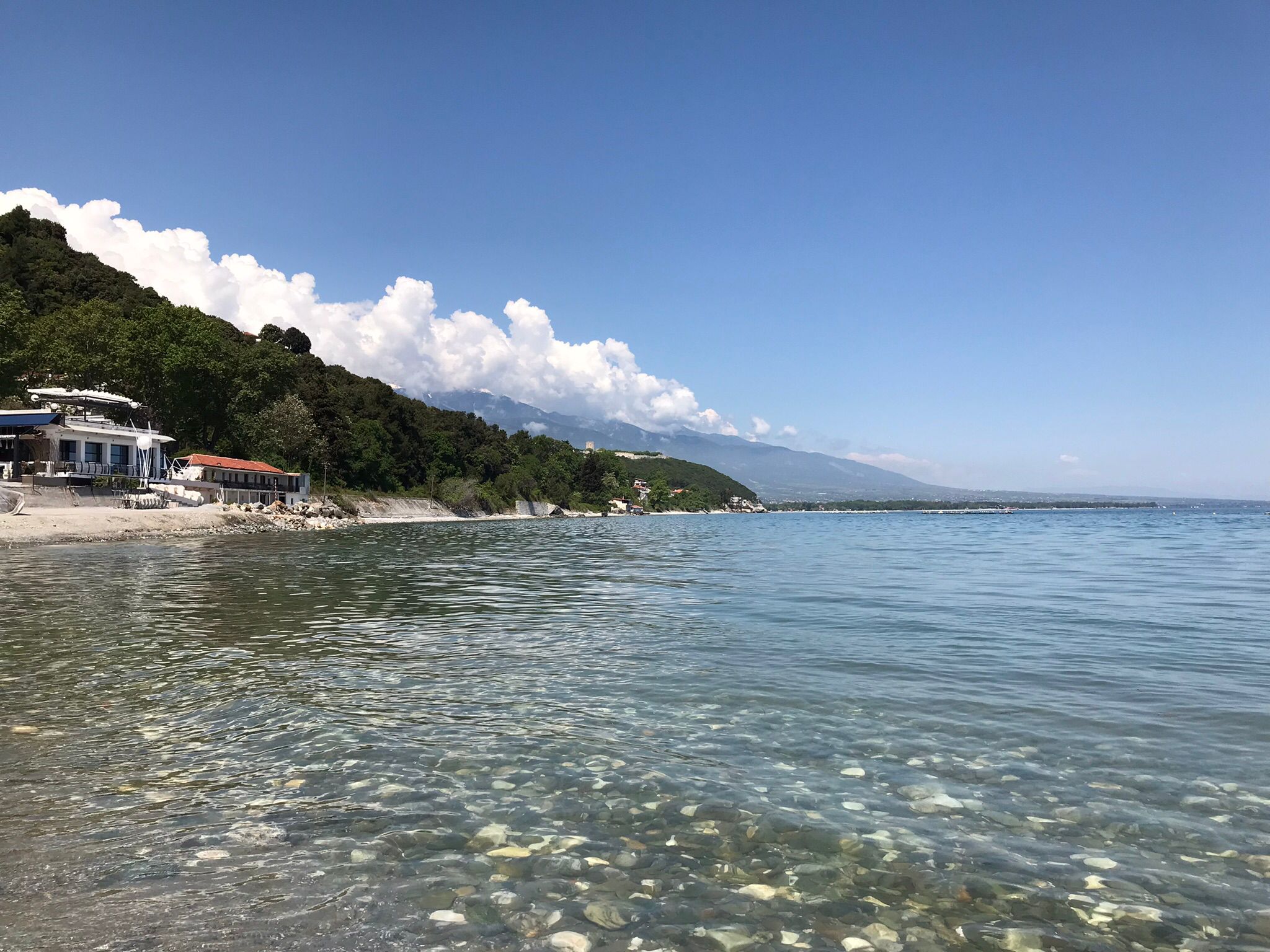 olympus, the throne (by Guido)

Olympus, ancient myth, sheer force of nature, tempting, treacherous trap, raw monument on the Aegean coast, green gray, rugged home of goat hunters, free flying birds, wild boars, singing insects, giant pine trees, smelling flowers. You have been on my mind long before this odyssey began. I read about you, heard about you, dreamt about you and I wanna see you, both your unforgiven cruelty and mystifying splendor. Will you let me?

A lot of big words, I know. An unhealthy level of idolatry, sure. Romanticism, I don’t care. Why? Well, normally I keep expectations low, avoiding the risk of disappointment, but not this time. This time intuition said: let it go, Olympus and the Olympians will not let you down. So after camping on the Katara pass, shortly gazing at the monasteries of Meteora and quickly passing through Trikala, I started looking left, scouting the horizon, searching for your ascending slopes. Because I knew, somewhere in the far distance, towering above everything else, you – an eternal throne built by time and space itself – were waiting.

I admit, without hesitation, your little brother Ossa fooled me for at least an hour: I thought he was you, playful yet disenchanting. What? Don’t get me wrong, Olympus, I respect almost every mountain: Ossa, Triglav, Pelmo, with or without snow, steep cliffs or gorges. It’s only that when I drew closer and closer, I simply couldn’t imagine Olympians living there. Lacking more than one mountain top and seeing almost no places for love making or hiding after pulling a joke – I mean, the day would be filled with even more trouble, chaos, counseling and anger management. Tell me I am wrong. Right, just as I thought.

You must have seen my smile when I caught your first glimpse. It was miles before Larisa when I saw your southern side. Lying there, you being – sorry for the cursing – majestic as fuck. Trying to hide, creating thick clouds all around you, not able to fool me like the lonely one did. I found the perfect camping spot in the middle of some fields, washed away the dirt and salt on my body, ate a plain meal, smoked a cigarette and then became your voyeur, both eyes fixed upon you until the last golden light of the day had disappeared.

Observing you from far away made me wonder how the first mortals that ever lay their eyes upon you, must have felt. Would they be in complete awe, just as I was. Or did they wonder: how does one go up there? You probably knew that my intention from the start was not to conquer you: all I ever wanted was a short conversation with you and the Olympians. And to achieve this, one does not have to go all the way up, nor stand on all 52 of your mountaintops. Somewhere around half way up and just what we mortals call an hour of discussion time would be enough, right? Because your all observing senses and nerves – hidden in and underneath the rocks, like the roots of the trees that over the years formed the steps of the winding paths that give access to your higher spheres – would feel me from there, wouldn’t they?

The following day, I rose early and started pedaling as fast as Ziggy could carry me, hoping to increase my chances of meeting you. In Platamon, you really blew my socks off. I had seen the mountains run into the sea near Nice, I saw Yosemite and the Northern Pacific in a single day, I introduced myself on this trip to the Alps from the Bodensee, but Olympus, you are in a league of your own. Seeing you rise out of the sea, it made me shiver like a five year old. I stopped, letting your presence sink in.

At the hostel, the advice about you was not as clear as I hoped it would be. Floating in the sea, I made up my mind: the next day I would cycle to Litochoro and begin walking up the trail from down there, taking a little risk since I didn’t know if my legs were strong enough to get high enough. The alternatives – biking to or letting me drop off at Priònia and start halfway – were no option. It felt like cheating, paying not the respect that should be paid. So at five in the morning, I jumped out of the bunk bed, ate as much cereal and yogurt as was present, filled a big bottle of water, cycled those ugly ten kilometers to the village, parked Ziggy at the police station, turned around, saw Helios riding his chariot above the hills of Kassandra, turned towards you, took a deep breath, ‘hugged myself all over’ and began putting one foot in front of the other.

Besides a single guy walking his dog, the morning belonged to you and me. Not even the faintest noise of ‘civilization’ was heard. Stepping through your thickly forested base on the 12th of May, it was just rustling leaves, running water, crawling lizards, snapping twigs, a swift breeze and me learning your mountaintops by silently singing the names I’d remembered looking on the map the other day – ‘Stefani, Skala, Skolio, Mytikas’. It made me fly and it did not take me long before I could see your nose, glittering in the sun. I kept pace, ignoring the call for help from the small muscles that, up to that point, hadn’t been tested while cycling. After five hours and a staring contest with a lizard (that I – in my opinion – won), I was in Priònia.

Drinking only water up to that point, the battery was empty. Bean soup, a loaf of bread with olive oil, some salad and an hours nap next to one of your thundering waterfalls gave me new energy. From that point on, it was just finding the right spot, the right moment and listening if you and your divining inhabitants wanted to talk. Three more hours of climbing up, I found a small spot. The slope was steep but there was a flat rock and a clear view to Mytikas. I sat down, waited till my heart rate was back to normal and began saying what I had prepared for you, hoping you would answer.

We had a good talk, right? Yeah you liked it, I could sense it. The day before you made it snow and rain up there but this time you shined like the perfect diamond. Besides that, you made the Olympians come and listen to me. So you must have liked it, indeed. Yeah, we had a pretty – pretty good talk. But we also made a pact, refusing me to tell where, according to you – and who knows better? – one can find your hidden gems, places that I did not see that memorable day, places that force me to come back one day. I also can’t tell why you set a rather sinister example by taking someone’s life two or three times a year. No, if they want to know your secrets, they must pay you a personal visit, starting at the bottom. It is for this pact that I can only share my questions to the Greek gods with the reading audience and the answers that were given.