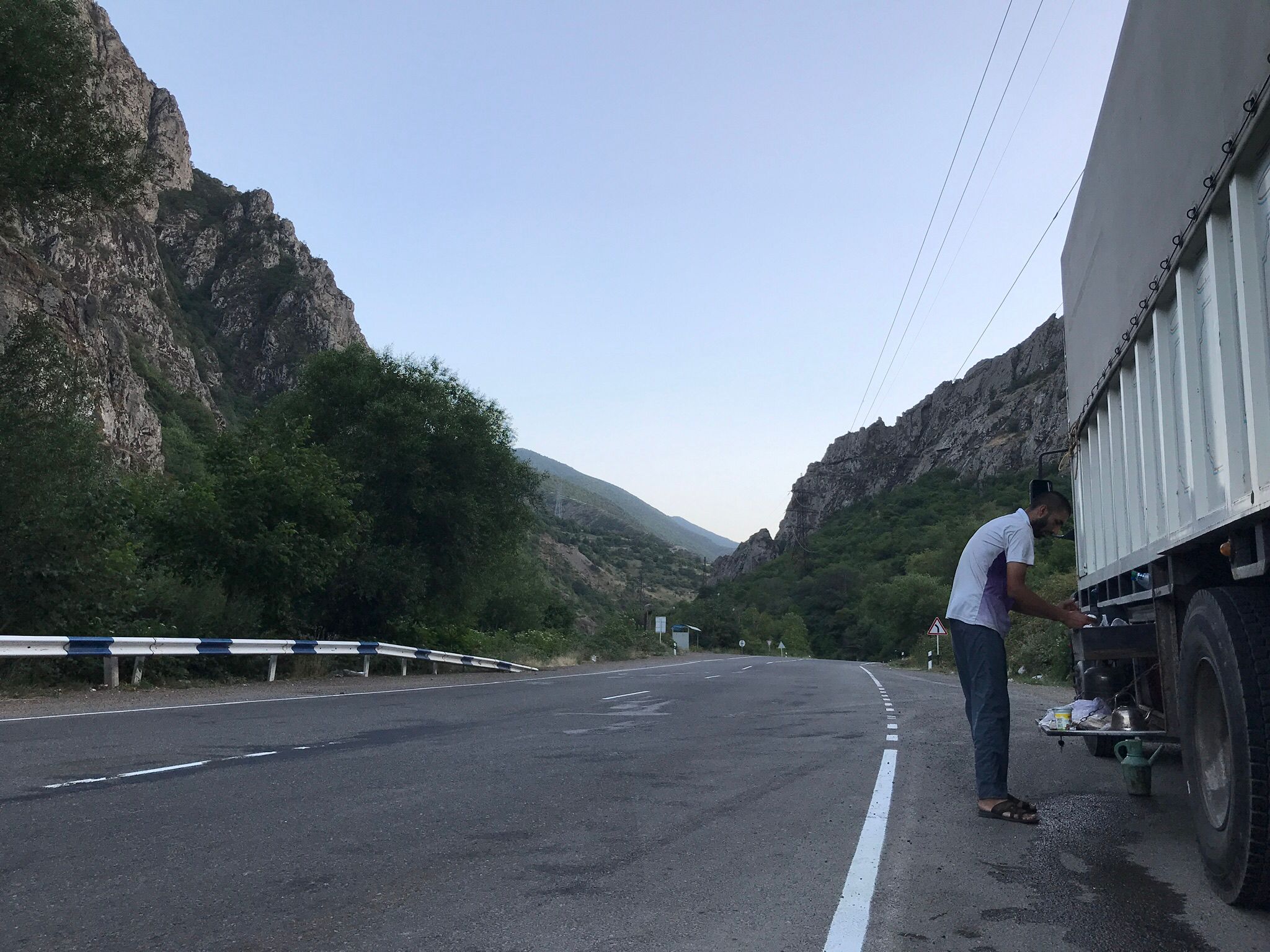 It was shortly after the Gates of Syunik when Guido started talking to me. ‘I believe I saw it in Albania. A kind of cheesy quote, Ziggy. You must have seen them earlier, empty words you find on low quality wooden boards. Live, laugh, love – Home is where the heart is. Cheap rubbish like that. For some reason, I don’t know why, this one stuck. Maybe because it wasn’t that bad after all. It was something like: “That you may break the patterns that no longer work for you”. I am thinking about those words right now.

‘Why, you might ask. Well, I can’t longer enjoy the world we are cycling through. And it’s not the world that causes my discontent. Look around, a marvelous plateau we are crossing: low hanging clouds, a massive mountain lake, happy farmers. It’s southern Armenia in all its glory. Yet, it does nothing for me. I did some thinking and I believe the strong head winds are blowing away the pleasure of being on the road. I believe my weak legs, feeling like they are filled with sawdust, are drilling the joy of exploring and experiencing the world deep into the ground.’

Yeah, it was quite windy that day. I must give him that. ‘Normally, Ziggy, I wouldn’t think of quitting but today… This quote dances in front of my eyes for at least the last twenty kilometers. That you may break the patterns that no longer work for you. Why wouldn’t I hitch a lift from one of those trucks that keep on blazing by? Cheating a few kilometers, not good, I know. But what if the joy returns? I have nothing to prove, to no one. I think I am going to break a pattern, stop the suffering.’

For the record, I am paraphrasing. These weren’t his actual words of course. I don’t always listen that well to him but the following is undeniably true: within half a minute after making the decision to ask for a lift to the first truck driver going in the right direction to carry us, a truck driver stopped, swung his cargo doors open and asked if we could use a ride. The truck driver’s name: Sina.

Sina and Guido drank cay, made a comfortable bed consisting of car tires for me in the empty rear part of the truck, lifted me in and made sure nothing could break or get damaged. Half an hour later we bumped with four times our normal speed over the bad Armenian roads. According to Guido, Sina was one of a kind. I don’t know about that, but what I know for sure: he was our first encounter with the unlimited Iranian hospitality. Here’s what Guido learned from him: